No Result
View All Result

by admin
in Cryptocurrency
0

Consensus 2018 took place recently in New York City, bringing together some of the greatest minds in the cryptocurrency space. High profile development teams and investors alike attended presentations and networked at the Midtown Hilton over the course of three days of the event. Given New York’s somewhat heavy-handed approach to the cryptocurrency industry, NYC was an interesting choice by the Consensus team. However, several members of the exclusive group that hold BitLicenses attended. This included the Gemini exchange – operated by tech magnates the Winklevoss Twins.

Consensus is run by cryptocurrency media concern CoinDesk, also headquartered in New York. Established in 2013, CoinDesk is one of the most prolific news sites in the industry and often the first to break critical stories. However, they’ve received substantial flak from the community in recent days due to their perceived lax journalistic standards. Nonetheless, Consensus succeeded by all metrics. The event was well attended and by all accounts well run.

As with any major industry, conventions and events are a choice time to announce new products and advances. Consensus is no different, and several high-profile companies seized the opportunity. The previously mentioned Gemini Exchange announced that they would be adding an entire array of new coins to their system. Litecoin (LTC), Bitcoin Cash (BCH) and Zcash (ZEC) will all be available soon. 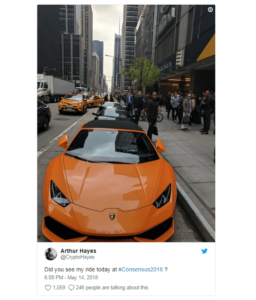 Further, relative newcomer to the scene RSK spoke about their project. Looking to add smart contract functionality to Bitcoin (BTC) itself, they’ve now achieved a 10% adoption rate among miners. As smart contract powerhouse Ethereum (ETH) catches up to Bitcoin in market capitalization, the legacy blockchain will have to look to new projects to generate greater impact. RSK’s sidechain is just one way that can be accomplished.

Finally, the city of New York itself announced a new project. The CEO of the New York City Economic Development Corporation, James Patchett, spoke at length about the city’s new project to create a hub for blockchain technology. The New York Blockchain Resource Center will create a physical environment where those looking to get involved with the new technology can congregate.

While the convention itself was a success, it still had a share of detractors. Chief among them is Vitalik Buterin, the head of the Ethereum Foundation and one of cryptocurrency’s strongest voices. His first and foremost complaint pertained to the rampant ‘giveaway scams’ currently infesting the industry. Some of these slipped under the radar and managed to secure a direct link from CoinDesk news articles, further bolstering the criminal enterprise.

Alongside Buterin, the development team for OmiseGO (OMG) and Charles Hoskinson of the Cardano (ADA) team all stated that they would not be attending. While the event continued without these industry leaders, CoinDesk will have to seriously consider the effect of their boycott. If the issues Buterin brought up are not rectified, they could find the boycott growing in future years.

OLB Group (NASDAQ: OLB) and Cuentas (NASDAQ: CUEN) Team Up to Bring Fintech Solutions to Over 32,000 Bodegas Across the United States

Safe-T (NASDAQ: SFET) Has Been Selected to Present at the United Nations’ Office of Information and Communications Technology Event

Versus Systems (NASDAQ: VS) and Resolve Debt Partner to Integrated Generative AI and Gamification to Customer Payments and Credit Markets

ADVERTISEMENT
No Result
View All Result

Subscribe to our weekly newsletter below and never miss the latest small/micro-cap analysis and investment news from Spotlight Growth.